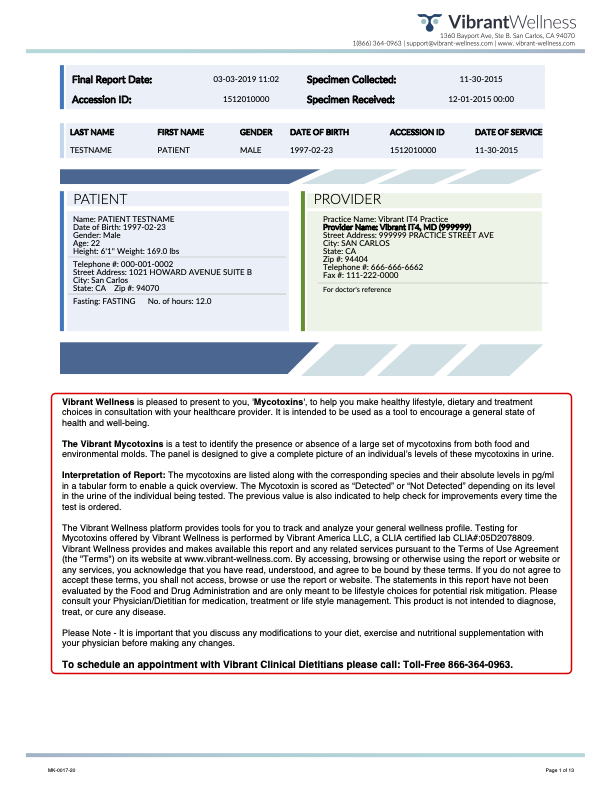 Mold illness, as a result of mycotoxin exposure, is becoming an increasingly prevalent problem among a variety of people nowadays. Individuals most at risk for mycotoxin exposure include those who live or work in older buildings, those who have known exposure to water-damaged buildings, and those with impaired immune responses or higher levels of oxidative stress.
​
Mycotoxins complicate human health in a number of ways and their presence in the human body can lead to a number of serious health concerns, including autoimmune disease and cancer.

What are Common Symptoms of Toxic Mold Exposure?
Mycotoxin symptoms are often general or vague, and difficult to associate with a diagnosis or disease state, and, therefore, may be overlooked during clinical assessments. Symptoms of mycotoxin exposure include:
​What are Mycotoxins?
Mycotoxins are a structurally diverse group of compounds, produced mainly by fungi,  or molds,  under suitable temperature and humidity conditions. Mycotoxins may develop on various foods and agricultural crops, causing serious risks for human and animal health. Currently, more than 300 mycotoxins are known, but scientific attention is focused mainly on those that have proven to be carcinogenic and/or toxic.

Human exposure to mycotoxins occurs through ingestion of contaminated foods and dirt, through skin contact with contaminated surfaces, and inhalation of air and dust containing mycotoxins. Food sources of mycotoxins include plant-derived foods that are contaminated with mycotoxins and mycotoxins and their metabolites in animal products such as meat and eggs. Unfortunately, mycotoxins are resistant to most food processing methods, including heat.

ln addition, water damaged buildings are a common route of mycotoxin exposure, and one that often goes unrecognized as molds can grow on almost any wet and warm place including inner walls of buildings, fiberglass insulation, and wall paper, among others.

Mycotoxins produced by molds may differ based on the species of mold and how toxigenic the species is. A single mold species may produce several different mycotoxins. Toxic effects can be acute, chronic, mutagenic, or teratogenic.
​
Harmful Effects of Mycotoxins
Mycotoxin illnesses, called mycotoxicoses or mycoses, can range from mild and reversible (e.g, athlete’s foot) to irreversible organ damage and life-threatening (e.g., invasive aspergillosis) depending upon the specific mycotoxin, the health of the individual, exposure levels, time course of exposure, mycotoxin interactions, and other circumstances.

Oxidative stress and inflammation are mechanisms that contribute to mycotoxin-induced toxicity. Mycotoxins have been shown to induce intracellular glutathione depletion, and studies suggest that antioxidants may mitigate the toxic effect of mycotoxins associated with oxidative stress.

For example, aflatoxins decreased absorption of calcium and decreased hydroxylation of vitamin 03 in animal studies. Additionally, while the effects in humans are less clear, animal studies suggest that the immunological  suppression associated with mycotoxins may be further exacerbated in cases of zinc, iron, and vitamin A deficiency.

Fungal Overgrowth Concerns
ln some susceptible individuals, Candida albicans and other opportunistic fungi may overgrow and present an additional layer of infection that may need to be addressed. Consider stool testing using the Vibrant Gut Zoomer Complete to assess the presence of Candida, bacterial pathogens, and parasites.

Conventional Medicine Treatments for Mycotoxin Exposure
lmmunotherapy and steroids are used to reduce allergic sensitization to mycotoxins. Mycotoxin-related infections are treated with anti-fungal agents, however anti-fungal resistance and the presence of biofilms may impact the effectiveness of treatment. decongestants, antihistamines, and anti-inflammatory agents are also used to treat mycotoxin-related symptoms.

Functional Medicine Treatments for Mycotoxin Exposure
ln addition to removal of the initial source of mold and mycotoxin exposure from diet or environment, there are a number of supportive supplemental therapies that can aid in full body  detoxification of mycotoxins.
​
Because mycotoxins are so inflammatory to the liver's normal detoxification capacity, detoxification is often impaired and the individual may become susceptible to multiple toxicities  during this time. Supporting healthy liver detoxification, and keeping all detoxification pathways open and functional is critical to elimination of toxins from all sources, to reduce overall  toxic load.

About the Mycotoxins Test
Vibrant Labs provides the most comprehensive mycotoxins panel on the market. The lab tests 31 different markers utilizing state- of-the-art mass spectrometry with our patent-pending proprietary technology that allows us to differentiate more mycotoxin markers and, as a result, be more specific in their results than other panels on the market.
Not only is their technology superior, but their laboratory itself is, too. Vibrant is proud to utilize premium mass spectrometry equipment, particularly liquid chromatography spectrometry, gas spectrometry, and inductively coupled plasma-mass spectrometry. Up-to-date instruments in the laboratory greatly aid in their detection of mycotoxins.

*Not Available in New York state